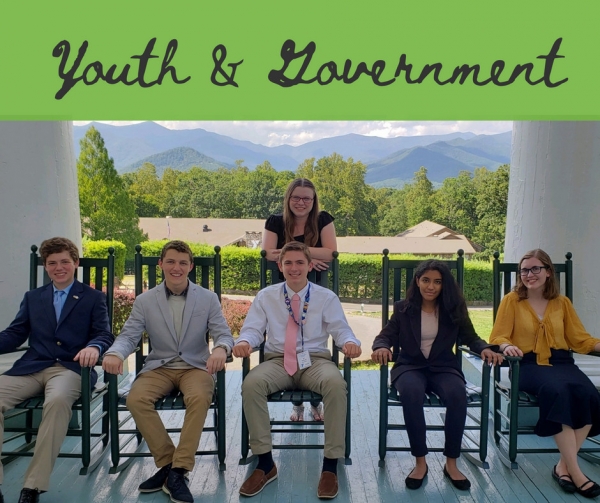 Pictured above are the Arkansas Representatives who attended the YMCA Youth Conference of National Affairs in North Carolina. Four Shiloh students are pictured including: Cooper Young, Jack Hertzberg, Eli Schulz, and Breanna Mapes

Youth and Government™ is a national program of the YMCA that involves thousands of teens nationwide in state-organized, model-government programs. Students from every corner of the U.S. have the opportunity to immerse themselves in experiential civic engagement and to, quite literally, practice democracy. Teens from across every state meet in their local Youth and Government groups throughout the year to discuss and debate issues that affect citizens of their state and to propose legislation. The program culminates with teens serving as delegates at their state conference, debating bills on the floor of the legislature.

The 2018 – 2019 school year was the first year that the state of Arkansas was involved with this program.  A student at the University of Arkansas who is a part of the Campus YMCA Congress (which is a student-run national model government program that engages college students by developing their public service skills) reached out to several schools in northwest Arkansas about starting the program.  Shiloh was one of the two schools who responded.  A small group started meeting on campus at Shiloh once a week from January until May.  In April of 2018, seven students attended the first State Conference at the University of Arkansas, and six of the students who participated were from Shiloh. Four of them ran for won elected positions that allowed them to attend the YMCA Youth Conference of National Affairs (CONA) in North Carolina including: Cooper Young (Pro Tempore), Jack Hertzberg (Youth Governor), Eli Schulz (Secretary of State), and Breanna Mapes (Speaker of the House).  600 students from 35 states were in attendance.

This semester this senior-led group meets once a month to write bills and debate about them in mock parliamentary procedure. They also brainstorm about solutions for problems in Arkansas and what they would like to see changed.  In the spring semester they will start meeting weekly to prepare the bill they will present at the State Conference. For more information about this program email Debbie Diehm – debbied@shilohsaints.org