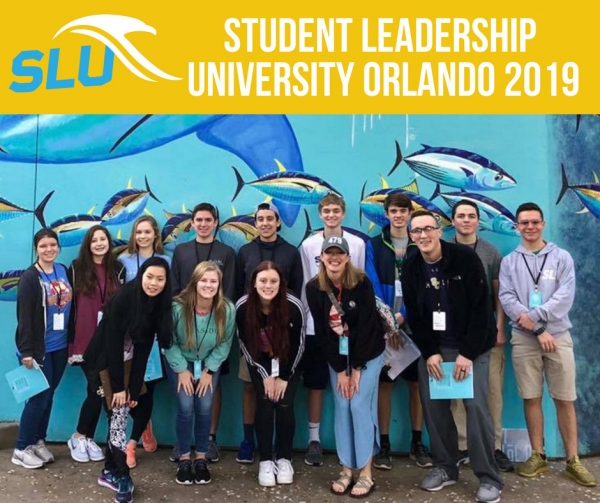 Students Pictured from Back Row (Left to Right)

"Sanctify yourselves, for tomorrow the LORD will do wonders among you." Joshua 3:5

Twelve Shiloh students attended SLU 101 in Orlando, Florida from January 18 - January 21.  This incredible opportunity takes students through a challenging series of leadership processes that equips them to have a “Renaissance Mind,” “The Heart of a Patriot,” “The Soul of a Saint,” “The Discipline of a Champion,” and the “Influence of a Leader.”   Student Leadership University's mission is to develop and equip student leaders to think, dream, and lead. This program strives to instill future tense thinking; character-driven decision making; ownership of biblical values; and a commitment to influence through service.  This is the second year that Shiloh students have attended this valuable program in a large group, and both years proved to make a significant impact on the lives of the students who attended.

The participants heard from various speakers throughout the week including top Christian apologists, like Dr. Dan DeWitt, and they were challenged to develop their worldview.  Junior, Bella Hudson, said that the sessions that challenged her most were the sessions on worldview.  She said that learning about atheists strengthened her ability to defend her faith. She also enjoyed the afternoon outing to Universal Studios and the roller coasters.

Freshman, Wilson Jones, was impacted by a session entitled, “Swallow the Biggest Frog First.” He said this session challenged him to avoid procrastination and do the hardest thing first.  He said that since he’s been back at school he has been using this method to prioritize his homework and that he has become more productive because of it.  He also enjoyed traveling and getting to be a part of the exclusive behind-the-scenes experiences with the animals at SeaWorld.

Nathan Bodenstein and Amy Wessels were chaperones for the trip. Mr. Bodenstein shared that there were over 300 students in attendance and this trip is one of four leadership courses that students can take from 9th to 12th grade.  He was personally challenged by the Christ-like servant leadership model that was taught throughout the week.

The leadership courses offered through this program include: SLU 101 in Orlando, SLU 201 in Washington D.C., SLU 301 in Paris & Normandy, and SLU 401 is in Israel & Jordan. The vision for the future of this program is take groups of Shiloh students to all of the leadership opportunities around the world each year.  To be eligible to participate in this school sponsored trip, students must be involved in one of Shiloh’s leadership programs such as SALT or Chick-Fil-A Leader’s Academy.

To find out more about this program visit:  www.slulead.com