The Prudential Spirit of Community Award 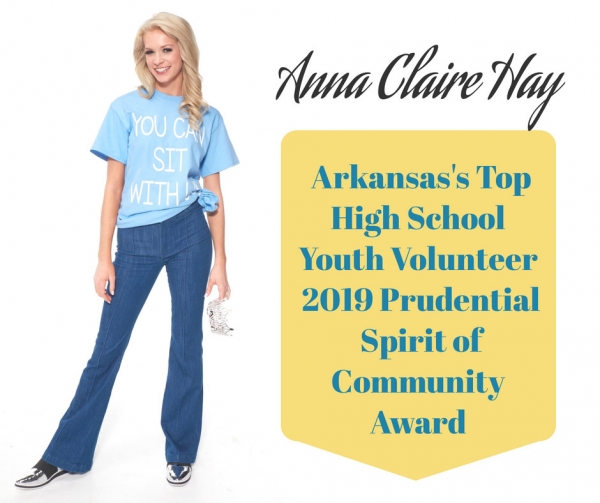 Anna Claire Hay, a sophomore at Shiloh Christian, was named one of two of Arkansas' top youth volunteers of 2019 by The Prudential Spirit of Community Awards, a nationwide program honoring young people for outstanding acts of volunteerism. As a State Honoree, Anna Claire and will receive $1,000, an engraved silver medallion and an all-expense-paid trip in early May to Washington, D.C., where she will join the top two honorees from each of the other states and the District of Columbia for four days of national recognition events. During the trip, 10 students will be named America's top youth volunteers of 2019.

The Prudential Spirit of Community Awards, now in its 24th year, is conducted by Prudential Financial in partnership with the National Association of Secondary School Principals (NASSP).

Anna Claire started “Teens with Integrity,” a campaign in her state to help young people find volunteer opportunities they are passionate about, and that can help them cultivate character-building qualities to make it easier to weather their own challenges. It all started when she was 11. Anna Claire's grandmother had Alzheimer's disease and was being cared for in a nursing home.  “Watching my grandmother's memory start to wane was both heartbreaking and compelling,” said Anna Claire.

“It became my mission to learn all I could from her life story.” As she spent more time with her grandmother, she realized there were many other Alzheimer's patients who rarely had visitors and whose stories would soon be lost.

Anna Claire secured a sponsorship from a local business to provide cookies and milkshakes each week at the nursing home, and invited friends to join her in visiting the residents. But she was quickly disappointed that most of her friends did not share her enthusiasm. She realized that her passion was not everyone's, and that she needed to help her peers find theirs by exposing them to different volunteer opportunities. To do that, Anna Claire speaks to groups about her campaign to get teens involved in their communities, and has a website where she encourages her peers to participate in projects such as conducting book drives, writing letters to servicemen and women, ringing Salvation Army red-kettle bells during the holidays, and serving as Santa’s elves. She estimates that, over the years, she has helped 8,000 students find meaningful ways to help others.